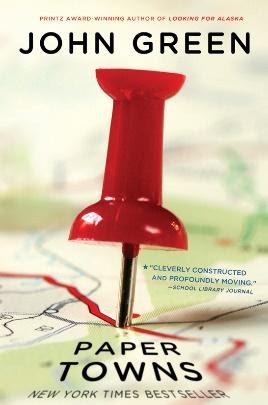 “The thing about Margo Roth Spiegelman is that really all I could ever do was let her talk, and then when she stopped talking encourage her to go on, due to the facts that 1. I was incontestably in love with her, and 2. she was absolutely unprecedented in every way, and 3. she never really asked me any questions…”

Quentin Jacobson has always loved Margo from a distance. One evening Margo climbs through his window to summon him on an all-night road trip of revenge that Quentin just can’t turn down. But the next morning, Margo does not turn up for school. However, she did leave clues to her disappearance, like a trail of breadcrumbs for Quentin to follow.

The all-night road trip of revenge includes eleven missions to get revenge on the people that have hurt Margo. Margo convinces Quentin to take his mom’s minivan and together they leave fish in a bedroom, vandalize property, break into SeaWorld and wax off an eyebrow. Quentin has the night of his life and can’t wait to see Margo again the next morning. When she doesn’t show up for school in the next few days, Quentin gets worried. He was the last one to see her before she disappeared.

Together with two friends Quentin starts the search for Margo. They find a clue in her bedroom window. This leads to chain of clues and eventually an address. Quentin and his friends decide to skip school and drive up to the address in the hope to find Margo. When they arrive, they find an abandoned mall. Inside the mall, Margo left a message painted on the walls that says, “You will go to the paper towns and you will never come back.”

Quentin spends most of his time looking for more clues but with no success. Eventually he finds a place called Agloe, New York. Agloe is a copyright trap, and on Wikipedia it says its population rose up from zero to one. Quentin believes Margo is here. He and his friends skip their graduation to drive to New York to find Margo. Here they find something they did not expect…

Quentin
Quentin, or Q, is 17 years old. He has been in love with Margo since they became neighbours. He prefers to spend his time gaming with his friends.
Radar
His real name is Marcus, but he goes by Radar. He is one of Q’s best friends. He is calm, has a girlfriend and spends most of his time on a computer. His parents have a massive black santas collection.
Ben
Ben is Q’s other best friend. Ben wants to be popular to get a girlfriend. He is outgoing and drags Q and Radar to parties. He comes across as selfish, but later gives his all to help out Q. He is also very funny.
Lacey
Lacey used to be Margo’s best friend, but also ended up in Margo’s revenge plan after she did not tell Margo about her cheating boyfriend. Lacey becomes Ben’s girlfriend in the end.
Margo Roth Spiegelman
She is the only one that gets a full name in the story. Margo is outgoing, adventurous and unruly, but also has a dark side. She considers herself to be fake and empty on the inside. Everyone always talks about how perfect Margo’s life is and how she is not afraid of anything.

Running themes in paper towns are coming of age and mysteries. Motives are friendship, betrayal, freedom, loneliness and love.

In the book an explanation of the title is given. The concept of paper towns is used by cartographers as a copyright. A non-existent town on the map could expose plagiarism. Agloe, where Margo disappears to, is such a town.

The name Paper Towns is also a metaphor. Margo mentions that their town seems to be made of paper: it looks good, but it’s all fake. Margo considers herself to be a paper girl. She pretends to be cool and fun, but she is empty on the inside. So, she goes to a paper town: a paper town for a paper girl.

The book is read from Q’s perspective. He writes in a past tense, so the book is actually a retrospect on the mystery of Margo.

This book holds a lot of philosophical questions, but they are explained elaborately to make them understandable. It urges you to think about your future. The story is placed in a high school setting, which makes the characters more relatable. The fact that Quentin is a very average boy makes the story easier to follow. It’s recommended to read this book when you’re in the last years of high school, since Quentin and his friends are seniors in the book and talk about prom and graduation. I liked that this search for Margo kind of reads as a detective story. The tension to find Margo builds up in the story and makes you want to join in on this trip to find the mysterious Margo Roth Spiegelman.