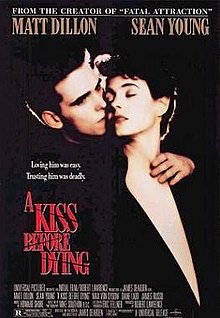 Who is the author of the book?

The author of the book is Ira Levin.

The title is A kiss before dying. Bud, one of the main characters, pretends to love his victims before he kills them. A kiss is a symbol of love.

When did the story take place?

The story begins in 1949 and ends in December of 1951. There are also some flashbacks to the past.

What are the main themes in the book?

One theme in this book is the desire for a lot of money. Bud starts a relationship with Dorothy because she has a rich father, hoping he will get a lot of money.

Another theme in this book is the balance between good and bad. Bud is the bad guy and he kills the good ones. In the end, the bad guy gets killed and good triumphs.

What type of book is it?

A kiss before dying is a novel. However, it also has some detective-elements in it.

Who are the main characters in the book and how do they develop?

Dorothy: you can read about Dorothy in the first part of the book. She has blond hair and brown eyes. She is very naive and believes everything. She really wants to get married, hence she does not take pills to end the pregnancy in order to marry Bud.

Ellen: you can read about Ellen in the second part of the book. Ellen is very intelligent and does not believe that her sister Dorothy killed herself. She does not trust anyone very fast. However, she finds out too late Bud killed Dorothy, which turns to her own death.

Marion: you can read about Marion in the last part of the book. Marion is very shy. She had never loved anyone since she met Bud. She argues a lot with her father Leo. In the end, when she found out Bud killed both her sisters, she really wanted him to die.

Bud: he gets involved with the three sisters. He is very handsome. However, on the inside he is very greedy and heartless. He will do anything in order to get what he wants, including murder.

Give an overview of the plot of the book.

This book has been divided into three main parts: Dorothy, Ellen and Marion. There three characters are sisters of each other.

In the very first part, you will read about Dorothy Kingship. Dorothy’s father Leo is very rich. Her boyfriend Bud Corliss is after that money, as he wants a bright future. During the story, Dorothy Kingships gets pregnant from Bud, which Bud does not like. He makes Dorothy promise that she will take some pills to end the pregnancy. If they do not work, Bud promises Dorothy to marry her.

It turns out that the pills did not end the pregnancy, and Dorothy and Bus decide to get married within three days. However, Bud was not planning to marry Dorothy and starts to plan the murder of Dorothy. He asks Dorothy to translate a Spanish line for him, which says: Darling, I hope you will forgive me for the unhappiness that I will cause. There is nothing else that I can do. Bud mails this translation in Dorothys handwriting to her sister Ellen, so they will think it was suicide. That evening, Bud gives Dorothy some poison pills, but she did not take them. The next day, Dorothy is still not dead, but the note is on the way to Ellen, so Dorothy has to die before Ellen receives the letter.

Dorothy and Bud decided to get married right away, but the Marriage License Bureau is still closed when they arrived. Bud already knew that, as it was part of his plan. He intends to wait on the roof of the building, where Bud pushes Dorothy from the building to her death.

Part two is about Ellen Kingship, Dorothy’s sister. Ellen is blaming herself for the death of her sister. She is also doubting whether it was really suicide, and she decides to investigate her death in Blue river. Ellen realizes that the building Dorothy fell off is also a marriage license bureau. Ellen thinks that Dorothy wanted to marry her boyfriend, and she tries to find out who that is. She suspects both Dwight Powell and Gordon Grant. Ellen contacts Gordon Grant and he tells her he did not kill Dorothy, which she believes. Ellen then writes to Bud Corliss that Dwight Powell must be the man that killed Dorothy. She contacts him, telling her name is Evelyn Kittregde. The two of them go out on a date, but during that date Dwight says strange things about women which makes Ellen believe Dwight killed Dorothy. After a while, Dwight finds out the real name of Ellen and he also swears he did not kill Dorothy. He also gives her the address of another man that knew Dorothy. When Dwight goes to that appartement, Bud turns out to be there and shoots Dwight. Ellen finds Bud and the dead body of Dwight, but Bud tells her that Dwight wanted to kill him, but accidentally shot himself. Later, Bud confesses everything to Ellen, as well as the killing of Dorothy. He then shoots Ellen behind a closed restaurant.

A few months later, Bud decides to contact Marion Kingship, the sister of both Dorothy and Ellen.

Part three is about Marion. Bud calls Marion, saying he still has a book from Ellen. The two of them get into a relationship. The father of Marion, Leo, is not happy with their relationship. However, they are planning to get married in December. Bud starts to work for the Kingship Corporation. One day, Gordon Grant goes to Leo Kingship because he thinks Bud killed both Ellen and Dorothy. Gordon has a lot of evidence that Bud killed both of them, and Leo as well as Marion believes him. However, they do not have enough evidence to go to the police.

The next day, Marion, Leo, Bud and Gordon fly to one of the Corporations smelters. When they are standing on a forty-foot-high catwalk, Leo and Gordon confront Bud with everything they have found out. Bud realizes they want him to slip off the catwalk and die in the same way Dorothy did. He panics and slips on the wet surface of the catwalk and falls into a vat of boiling liquid copper.

Marion, Gordon and Leo return to Kingship’s apartment where Bud’s mother is waiting for them. ‘Where’s Bud?’ she asked.

From whose perspective is the story told?

Why did you choose this book?

I chose this book because I really like detective-like books where someone gets killed and they are trying to figure out who it did. In this book, you as a reader already know the killer, so I thought it would be nice to read a book in the perspective where you already knew who did it.

What was the most interesting part of the book in your eyes?

Which character did you find most interesting/appealing?

I was really surprised by Gordon Grant. I really admired that he continued to investigate the murder of Dorothy (and later on Ellen), even when he was accused of being the killer. I really appreciate his perseverance to find the killer of Dorothy and Ellen.